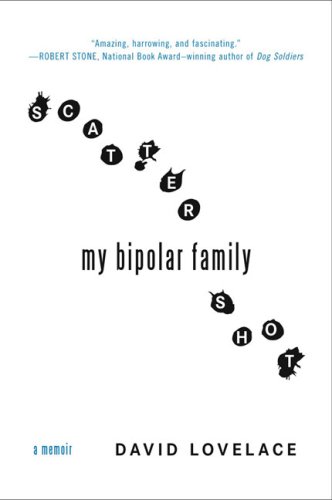 Scattershot a memoir by David Lovelace about growing up in a bipolar family is interesting and very dark. I have read a number of memoirs written by individuals who suffer from bipolar including Madness and Manic I liked both of these better then Scattershot. I do not know if it is because Madness and Manic were written by women so it was easier for me to relate to the stories (I do not have bipolar but like everyone else alive and walking around with some insight I have my own insanity) or if it was because in Scattershot there was a much greater focus on David's family and his interactions with them and in fact his running away from the illness that really did rob him and the rest of the family a younger brother and sister and both parents of a life that had any true peace.

The author writes a lot about his relationship with his father and also the relationship between his mother and father. Lovelace's father is a very religious man,a fundamentalist Christian who spends most of his life believing that he can cure himself and his wife (who may be bipolar or may be schizophrenic they family is never really able to get a true diagnosis) by prayer and through God. Needless to say this does not work out and the book opens with Lovelace finding his mother on the floor of a very filthy apartment dying in a state that can best be described as catatonic. The elder Lovelace had gone off of his own medications and then altered his wife's medications, switching from pharmaceutical prescriptions to B vitamins and soy protein shakes.

David's mother ends up at the hospital being treated for dehydration and something other then a stroke. Once again the family is never really given a true diagnosis. Lovelace spends a number of days trying to have his father committed which is much easier send then done even with a telephone call from the family psychiatrist who informs the hospital that the elder Mr. Lovelace needs to be committed. After a number of failed attempts along with his father's increasing mania David is finally gets a involuntary commitment order and his father is brought to the hospital by the police.

The book then goes back in time to when the author experienced his first depression and subsequent mania. Being rightly terrified of what awaits him he escapes going to colleges and Colorado and then down to Central America where he can feel himself slipping off the edge but being unable to stop it. While one can imagine the horror going on in the author's own head he spent months sitting in the sun and on a beach and while I am aware it does not matter where you are if there is no quiet within your own mind it was a little difficult to have sympathy for someone who had the ability to spend months sleeping in a hammock, going snorkeling, having sex and smoking pot.

Lovelace finally has a full manic break and ends up committed in California. His father arrives and brings him back home where he gets on some medication and meets a girl. After a few months of medication Lovelace decides he can handle his disease without the medication and moves to Manhattan and becomes part of the squatter movement. Marijuana along with hard work and being surrounded by a bunch of crack heads and others with significant mental health issues allows Lovelace to feel normal and he spends more time ignoring his illness and self medicating.

Another break and he ends up back on lithium and this time with a good shrink and the acceptance that yes he along with three others in his family suffer from bipolar and it is a disease that must be managed and will never be cured.

If you are interested in mental health issues and how they affect individuals and families then you need to read this book. With that said I would not say this book was uplifting nor does it give a lot of hope. Lovelace does not have a life that I envy.

Medicine is often helpful in the treatment of mood cycling, Bipolar disorders, in children along with help for the parents in learning more effective ways of managing the behaviors the disorder tends to bring about. There are, however, some important obstacles that can prevent a child with such a problem for obtaining a thoughtful and accurate diagnosis and effective treatment.

Firstly, most parents know that young children can all be moody sometimes, Consequently, it is not unusual for parents to be slow to bring concerns about mood, as they may be impacting a child's behavior, to the attention of their pediatrician or to that of a mental health professional who has special expertise in dealing with children. Many parents, quite understandably, see the symptoms, are distressed by them, but persuade themselves that the child 'will grow out of it.' Maybe, and maybe not.

The risk of the condition being undiagnosed and untreated is great. Things tend to get worse and more difficult.

Parents and their fears and hopes are not the only obstacle to a child getting effective treatment for a bipolar disorder either. Pediatricians are, generally, not well trained or versed in the nuances of psychiatric diagnosis and treatment. Additionally, some Child Psychiatrists as well as Pediatricians are reluctant to utilize the class of medications most often effective with bipolar disorders, a class of medicines called, "Mood Stabilizers." This is understandable as few of these many medicines have been subjected to intensive clinical trials with children.

Physicians who use them with sparing cautiousness with children have found them to be often effective as a component of an overall treatment plan for the child. Having worked with such children and collaboratively with physicians who specialize in using medicines with them has confirmed this idea experientially for me over many years of direct clinical practice.

Often, children suffering from Bipolar Disorders are misperceived as being 'stubborn,' 'very moody,' 'manipulative,' 'provocative' or just plain 'bad.' This is an often preventable tragedy as where the condition truly exists, by definition, that patient, be they adult or child, lacks the biogenic capacity to fully defeat the disorder's impact no matter how motivated they may be.

Does Bipolarity exist in children? Most certainly.
Is it treatable? Most usually.
Will it self resolve without intervention? Possibly, but the likelihood is not promising.
Is it difficult to ask for help for a child? Always.

Sometimes the hardest thing to do may turn out to be the best.